TOP's four lens model changes management's perspectives and ​processes for value and project delivery When we approach project delivery through the cost control lens we are doomed to failure. Two additional lenses are required for success.

To date the predominant driving force behind projects has been the cost control ‘lens’. This single lens has been widely adopted by all parties as their primary measure of success (ie ‘on time and budget’). The trouble is that it frequently leads to poor results - not because the cost control lens is unnecessary, but because it is not sufficient.

There are four crucial perspectives - we call them lenses - through which projects should be viewed - the technical, project, business value, and investment strategy lenses. It is the business value and investment strategy lenses which have largely been neglected, even though they are in fact the most critical to project success. Together these two lenses bring new insights that change how we approach and measure project investments - they drive and measure projects in terms of both business value and strategic results. 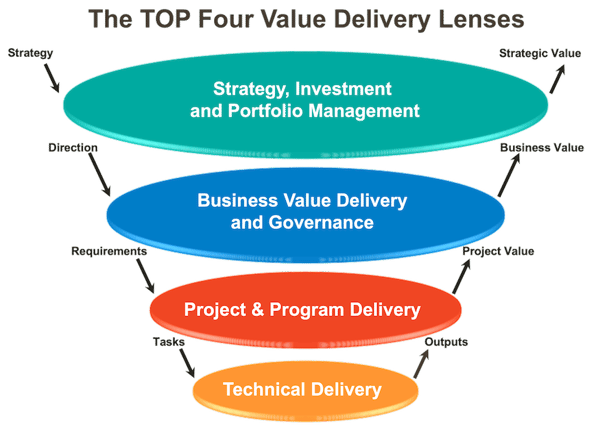 Adopting and using a multi-lens approach enables you to reduce your investment expenditure yet deliver the same or an increased level of results.

When Darwin proposed his theory of evolution, he introduced a different lens to explain the make up of the biological world. His thesis eventually replaced contemporary creationist belief systems with a scientific discussion of how different animals, insects, and other living organisms had progressively evolved from the beginning of time. In effect, he created a whole new field of science — modern biology.

Similarly, when Einstein proposed his theory of relativity, he explained the dynamics of cause and effect using a new lens. His theory superseded the mechanistic Newtonian view of the world with a discussion of the relativity of speed, light and time. This in turn created a whole new science too — quantum physics.

Now, we're proposing a new approach to project delivery with the introduction of the ‘investment strategy and business value’ lenses.

That's not to say it will change the world tomorrow; just as some people still hold on to the creationist view of the world or to a mechanistic cause and effect view of physics, so too will some continue to cling to conventional project cost control-based belief systems.

Let's start by acknowledging that project delivery is not easy. It is challenging, complex and multi-faceted.

Each project is a unique, never-to-be-repeated series of steps designed to deliver, enable and support agreed business outcomes, benefits, and value.

Each project exists in a sea of uncertainty, buffeted by issues and risks as it navigates business needs, complexity, politics, and pressures. However, since projects are most commonly planned, managed, and measured using the single cost control lens, we effectively drop the anchor through our hull before we even start. As Homer Simpson would say, “Doh!”

Worldwide, the vast majority of projects fail in one or more dimensions — delivered late, over budget, not to specification, not meeting business needs, delivering little-to-no value, or total project collapse. We have consistently shown that most projects actually deliver less than 50% of the available value.

Over 90% of projects fail on one or more dimensions.

This figure is too high to continue to be ignored and yet business approaches to project delivery have changed little in the past 30 years. Such changes as have been made mostly focus on improving project management and cost control, yet successful delivery of projects requires the counter-balancing forces of multiple project-related lenses – technical excellence, cost control, business value, and investment strategy.

The almost exclusive use of the project management cost control lens has not been successful. Almost every executive can list a similar set of real life examples to these that follow. Unfortunately these types of project results are the rule and not the exception! Take a look at these real life examples:

1 A utility was implementing a mandatory project to an immovable deadline. The project's intent was to automate B2B transactions and consequently allow the reduction of six staff.

The project was delivered on the required date, met the required transaction specifications, and was only 10% over budget, so according to the single cost control lens measures it was moderately successful. But it actually increased the workload in the operational areas because it did not support the transaction exceptions and queries (which had now increased) and it took six months to stabilise the system. Instead of reducing staff, the department actually had to recruit four additional staff!

2 A finance company was replacing its 30 year-old systems to eliminate their massive maintenance costs and a lack of functionality. The project was abandoned after an expenditure of $44m (of an originally approved budget of $24m). A subsequent project to just ‘front end’ the old system also failed.

3 An equipment leasing company implemented an Enterprise Resource Planning (ERP) system. The budget was $26m but the delivered cost was $72m — a cost that very nearly put them out of business.

4 A distribution company spent $24m on a new ERP system that failed to process standard business transactions when implemented. It was withdrawn after one month and the previous system reinstalled. Later, a new project implemented a replacement system at an additional cost of $52m.

5 A manufacturing company turned down a quote of $35m for an ERP system implementation and instead accepted one of $14m. The implementer put on his ‘D’ team and the project crashed 15 months later. The vendor stepped in to rescue the project and delivered it for an additional $43m. By the end of the fiasco, the CEO’s only measure of success was that the project never again appeared on the front page of the financial press!

6 A bank was implementing a new Human Resources Management System (HRMS) and employed a top-flight, HRMS-experienced Project Director. The project was cancelled when $17m of the $12m budget had been spent and the project was still in the ‘requirements definition’ stage.

We could continue with many, many more examples, across every industry, describing the results of single-lens driven project failure. These results clearly demonstrate that you cannot achieve the returns on investment you desire solely through using the single project management/cost-control lens; this lens delivers only one set of processes and one perspective and, by itself, is a major constraint on project investment success.

These examples also clearly indicate that something is fundamentally wrong with how we approach projects. TOP therefore went back to basics and through our research we rediscovered the two additional lenses required and how they change the results achieved.

Learn more about the Four Lenses